A man of all period, all genres, all places.

Introduction†:
Use of long or extreme telephoto lenses (during the battle at the end of the seven samurai)
He prefered not to write alone in orfer to avoid one-sideness.
Use action like hues on canvas,, introduce the characters swiftly. Tracking shots (the ridding at the beginning of Kumonosu Djo, during Kagemusha.
The motion is often made by men only, while the camera remains still (pulse of motion carried by one man alone among many others†: the messenger in Kagemusha).

About the cinema`
He feels the form of expression should be simpler. Modern movies, using technicolor, are too complicated. He thinks that Rosellini try to simplify.
That was the technique employed in Rashomon or In the forest, entirely shot out of doors.
About Rashomon†: Is there a truth†? Can the truth be grasped by our mind, and will our egotism prevent us from grasping it†? He added the final scene (wich wasn’t in the original novel), to show faith in humanity.
Talking is a major part of the process of creating. He talks with scriptwriters, actors…

About Toshiro Mifune†: Kurosawa likes his swiftness of reaction. He discovered himself thanks to Mifune (for a part), in Yodore Tenshi.
´i have always thought of films as a kind of journalism†ª shape contemporary happenings in a movie.
Importance of objectivity for Kurosawa.
Ikiru arose from this feeling of Kurosawa†: ´†sometimes i think of my death… how could i ever bear to take a final breath, while living a life like this, how could i leave it†?
There is so much to do, i feel i have lived so little yet. Then i become thoughtful, but not sad.†ª
Kumonosu jo†: How to adapt Macbeth to japanese way of thinking, especially concerning the spirits, the witches… he decided to use the No style, because in this style story and style are te same (lady Macbeth (asaji) washing her hands scene is pure No†; it’s the same about the asymetry during the discussion between macbeth and his wife before the assasination of Duncan†; on the opposite, there isn’t any No style in banquo’s ghost scene.) Asaji little space is pure No.
Kurosawa showed a mask of No to each actor, depending of their role.

About the westerns†: they form a sort of grammar, from wich he learnt.
About the sound†: too much sound, flood of sound is meaningless. Treat it with care (Yamana’s kimono as she prepares for Duncan’s murder in Kumonosu Jo)

In order to respect No style composition, he avoids close up, even during fights.

Peasants remain on earth, samurai are blown by the wind of time.
Kurosawa despises the violence. 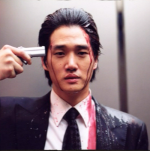